The Internet has already changed all spheres of human life. That’s not news for anyone. Along with the development of the World Wide Web, the need for specialists in this field has increased manyfold. Programmers who work on web technologies are called web programmers or web developers. Such specialists are engaged in the creation and maintenance of websites and web applications. As of January 2021, there were over 1.83 billion websites on the Internet. Large corporations, small companies, or just personal sites – all this is a world of opportunities for a web developer.

Creating a website or web application is a complex process consisting of several stages. It starts with an idea and a design layout that defines what the site will look like. The second stage is the implementation of the visual components of the site based on the design. At this stage, code is written that implements the layout and site functionality. And at the third stage, you need to write the server code and deploy the site onto the web.

Web development is a general term. In reality, web programmers are divided into two areas: frontend and backend.

As a rule, these tasks are carried out by different people. The UI/UX designer is responsible for the design. For the second stage – a frontend programmer, and for the server part (backend) – a backend programmer. A specialist who can perform frontend and backend tasks is called a full-stack developer.

Who is a Front-end Developer?

The front end of the site is the part with which the user directly interacts.

So, as mentioned above, the Front-end Developer is a specialist who deals with the visual part of a site or web application. They must set up the layout, as well as implement scripts to create and improve functionality.

A site that displays beautifully on all devices, from mobile to widescreen; a website that quickly responds to any user action is the task of a frontend developer. The first impression of the visitor about the site largely depends on their work.

In the process of chasing customers on the Internet, many site owners are constantly improving and modernising the interfaces of their sites, trying to make them visually more appealing. Old sites that were created back in the 2000s are being improved. Therefore, the demand for Front-end developers continues to be high. So high, in fact, that there are not enough specialists on the market. 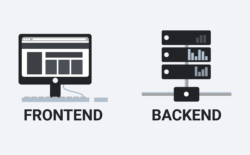 How to become a Front-end Developer?

To master the profession of a Front-end Developer, it is not necessary to have technical education. Of course, this can help in acquiring the necessary know-how but it is not a determining factor for landing a job.

You can enter the profession through a focus on skills instead. Every Front-end Developer must be a good coder capable of creating layouts of varying complexity. In order to become a layout designer, you need to master only 3 technologies: HTML, CSS, and basic JavaScript. Having studied these technologies, you will be able to start scoring real layout-design jobs. An entry-level Front-end Developer should be able to code layouts that are:

Then you can gradually deepen your knowledge of other technologies and tools. By improving your expertise, you will also qualify for a higher salary.

For the qualitative performance of their tasks, Front-end Developers must be proficient in the following set of technologies:

How much does a Front-end Developer earn?

According to Glassdoor, the average salary in the UK for a layout designer is £51,580. This is an average value and more often than not the payment depends on your experience and responsibilities.

The average salary for entry-level Front-end Developers is £31,000. The higher your level of knowledge, the higher the payment. Senior Frontend Developers can earn £96,000 and more.

Where to go next?

Like many Tech professions, the frontend developer has several options for further development. You can learn related technologies (design, backend, etc.) and become a full-stack developer. This will increase the cost of your labour several times.

You can develop in your field, mastering more and more new technologies and tools. Tech does not stand still, and new developments appear almost every six months.

A front-end developer can safely move up the career ladder by applying for leadership positions. Leaders who understand the development process are highly valued on the job market.

Or you can become a freelancer and work for your own pleasure, earning no less money than in a company.

Where to study to become a front-end developer?

Nowadays, there are many open sources of information available. Youtube, Google search – here you can easily find all the necessary material for training.

But this approach is not for everyone. Not every person will be able to build a clear plan for learning a new specialty for themselves. For a quick and, most importantly, high-quality result, it is better to find a mentor – a specialist in this field. They will guide and channel your learning.

Another option is to opt-in for training courses. Programs such as DAN.IT’s can equip you with relevant skills and provide the right roadmap for making it as a Front-end Developer. This will save you years that you would have spent studying on your own. 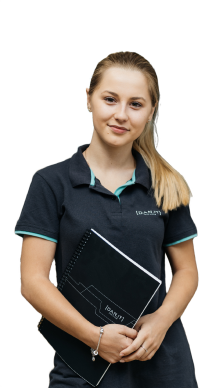